Follow @MyTypesOfCats
You are here: Home / Cats / A feline mayor? 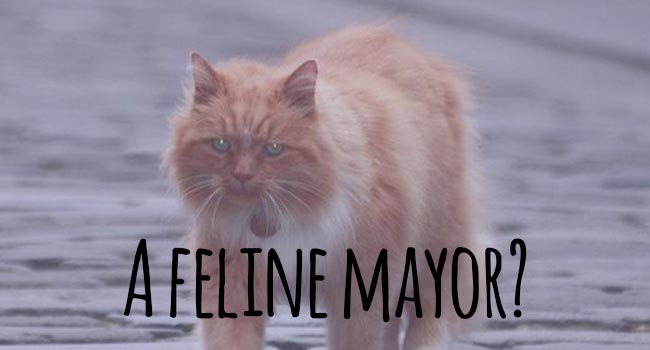 GARD Pro Not Registered
In the beginning of April this year, there was quite a gathering of people in Saint Andrews in Scotland. There were people from the city as well as curious strangers from all over the world, wanting to attend an event you don’t see very often. It was the unveiling of the bronze statue for one of the cats in the city for which the citizens gathered around seven thousand euros.

The story of Hamish McHamish

The life of this four legged celebrity began fourteen years ago in the home of his owner, Marianne Baird, a retired BBC producer. As her pet grew older she realized he wasn’t quite happy being confined inside and she almost felt like she was holding him hostage because he kept scratching at the windows, begging to be let out.

Like any cat owner letting their cat out, she was worried he might not come back, but each time he was out, he stayed a bit longer. He became familiar to the citizens because he’d turn to them for food, water or rest if he wanted it. He quickly became so familiar to them, that they all greeted him with joy.

Many citizens joke how Hamish started looking at Saint Andrews as a stage of his life because he acts as if he were the mayor of the city. Although Marianne doesn’t bother confining him inside the house anymore, she still takes care of him and takes him to the vet for a check-up. He also occasionally likes to stop by at her house to take a nap. Most cat owners agree that’s as close as you can come to a “thank you“, at least in this specific situation.

He is viewed as the main representative of the city so god forbid if anyone lays a hand on him. Figuratively speaking of course as he is widely accepted and doesn’t tend to run from people.

The knowledge of his existence has spread over the boarder of Scotland. Saint Andrews is one of the more important centers for universities and many students, not to mention tourists who come to the city, accept the famous feline with excitement.

Even as he was present at the unveiling of his statue, Hamish simply stood next to it, as if recognizing the similarities they shared, just before posing patiently for the flashing cameras to take their picture. He also has a Facebook page with over five thousand followers, and he hasn’t gone unmentioned on twitter either.

Hamish McHamish is a great example of how animals and people should be treated because, although he views the street as his home, wandering around the city as he pleases, people treat him kindly. He can’t of course be compared to a homeless person but the way people treat him spreads a message that even though animals or people live on the street and don’t have a home to go back to, that’s not reason not to make it a better and a more comfortable place for everyone.