Follow @MyTypesOfCats
You are here: Home / Cats / Can cats swim? (no really) 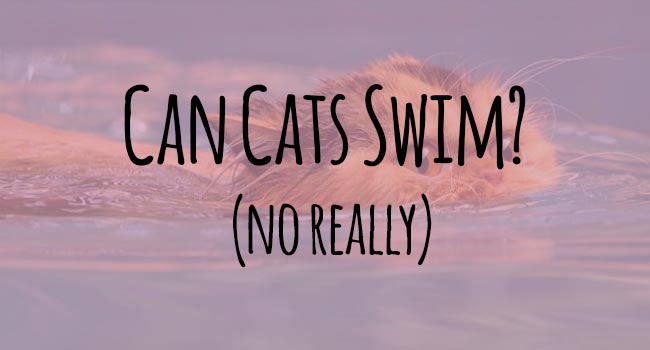 GARD Pro Not Registered
Cats are commonly known as one of the few creatures that hate being in water. Although this may be true for many cats, it doesn’t apply to them all.

Cats usually tend to avoid water and there is rarely a need for the owners to give their kitty a bath so there is hardly a chance to find out if all cats have the same feelings about water. If they avoid it, how can cats swim?

Do cats hate water?
Cats are like just like people when it comes to preferences. Some cats like certain types of food, some love fish while others can’t stand it.

Some cats like to cuddle and some will growl at you even if you think about it. And some cats despise water, and others love every drop of it.

Cats are the most important ingredients in cute online videos, so you can be sure to find many videos of felines that love the water.

I remember seeing one where the cat would protest if it were removed from the water and proceed to return back in it.

So in short, not all cats hate water. Perhaps your cat loves it but it hasn’t had the chance to check it out.

But if you’re curious, please don’t proceed to throw your cat in a tub filled with water. If you choose to though, be prepared for any reaction, from a joyous swim to an aggressive cat assassin.

Can cats swim or not!

For a more elaborate answer, there are many facts across history.

The ancient Egyptians relied on the abilities of cats, not only when it came to hunting mice, but also when hunting fish.

Some cats swim for pleasure, for example the Turkish Van is also known as the swimming cat. Meanwhile certain types of cats, like the tiger, can swim for longer distances if necessary.

If you find yourself in a situation where you’re running from a feline though, don’t expect water to be your escape.

Although most cats hate the water, they don’t fear it, and will most definitely jump in if they feel the need for it. For example when they feel they’re being attacked and there’s no way out or if there is something in the water they are desperate to reach.

Cats are natural swimmers just like dogs, however domestic cats aren’t quite used to water and tend to avoid it.

An interesting fact when it comes to swimming is that it’s more or less based on an instinct. People have to learn it at a specific age, however babies that just came into the world will know how to swim for a certain period of time.

They don’t fear the water as adult humans do when they’re learning and they find it much easier to relax to keep themselves afloat, however after a certain period of time has passed, they lose the ability and have to learn it later on in life.

Much like young children don’t see the danger in large animals or anything that adult humans might find scary. Cats and dogs don’t take as much time to learn it as we do.

If you choose to test or even teach your pet how to swim, be prepared to get it out of the water should there be any problems, as well as provide the means of leaving the wet environment.

Wild cats in warm areas of the world, where there isn’t much rain present, usually love a dive in any water they can find because, just like humans, they love cooling down in hot weather.

Why do cats hate water?
Many assumptions are formed around this question. Many scientists believe the experiences cats go through in the rain are unpleasant and give the impression of a forced bath, or perhaps when owners use water to discipline the cat, it hardwires the image of it as something negative.

Also when owners protect their cats from the elements. If you bathe your cats when they’re young, they’ll grow accustomed to the feeling and view it as nothing negative.

Cats frequently explore it with their paws or simply gaze at it in certain situations, so it’s clear to say that, whether they hate it or not, cats are indeed very fascinated by water.