Follow @MyTypesOfCats
You are here: Home / Cats / Do Cats Whiskers Grow Back? 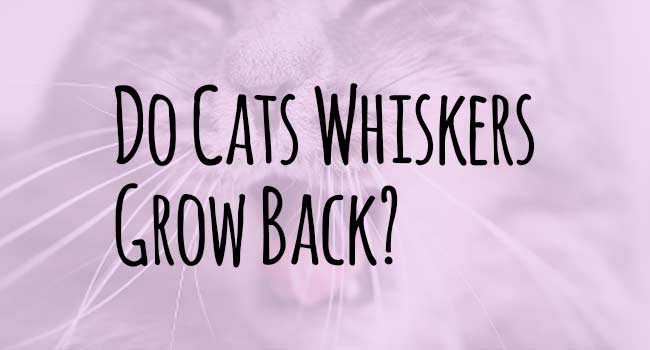 GARD Pro Not Registered
If the whiskers of your cat are cut, they will grow back however you shouldn’t be cutting them. Cats shed whiskers as they’re a type of hair and they will easily grow back.

When do cats whiskers grow back?

Well that one takes a while but they will grow back eventually. If your cat accidentally rips a whisker or two somehow, it’s nothing alarming but you as an owner should never ever cut your cat’s whiskers.

“To be the cat’s whiskers“
This idiom means being better than everyone else and it stands for a reason.

Whiskers have several uses for a cat. They’re used to measure an opening through which a cat can pass and based on the feeling the cat realizes if it can or cannot pass through it.

They’re also used for feeling their way in the dark as the cat feels the currents of air that go around various objects hidden in darkness. No, cats cannot see in places where there is 0% light.

They can see extremely well with minimal illumination that’s useless to humans but they don’t only use their eyes to navigate the darkness.

Smell, whiskers and their ears are perfect and most effective tools that provide your cat with a general image of its surroundings. You can hardly say any ordinary hair would have a role in this task.

Cat whiskers are present not only on your cat’s face but also on the jaw line and on the back of their front legs. As far as the face goes, they’re present on either side of the nose, upper facial lip and there are also a few whiskers above each of the eyes.

Whiskers fit the body
They’re usually as wide as the average width of your cat’s body. Many cat owners have reported that when their cat gained or lost weight, through a larger period of time the whiskers adapted to the size.

Cats shed whiskers and sometimes they eat them, so that’s nothing alarming although fairly strange to see. To some cats they fit the body, meanwhile with other cats they can be naturally shorter or wider than the body.

The fact that cat whiskers appear to be the same size constantly is the main reason why most people assume they won’t grow back.

Cats are very interesting in this aspect as the most common assumptions about them aren’t always entirely correct.

Most cats hate baths while some love them. Some cats enjoy the company of humans while others take forever to start trusting them.

Also most cats like chasing mice and are very active while others either play with mice or entirely ignore them. This is both due to the personality of the cat and the way it was taught.

You should never cut them
Cutting cat whiskers is painless however ripping them out is extremely painful as they’re connected deep in the nerve tissue, once again something ordinary hair isn’t. This deep nerve connection allows them to use the whiskers the way they do.

The entire area where the whiskers are on the cat’s face is extremely sensitive. Whiskers are also used to display emotions. It has been noticed that cats who lost their whiskers die of starvation as they cannot adapt or function without them.

Many others however adapt and after a very difficult period of time, which includes issues with walking and general balance, they learn how to live without them or at least long enough until they grow back.

They should never be cut, no exceptions.

Loss of the whiskers can only provoke negative side effects. Losing a whisker or two isn’t that big of a deal, so if you accidentally cut a pair of your cat’s whiskers it shouldn’t be an issue. They’re more present because of their use and less because of the appearance.

Do cats whiskers grow back?

Yes they do, this doesn’t mean you should cut them. Most owners ask this question after they cut their cat’s whiskers, I’m hoping you’re not one of them, and if you are, the best thing you can do is help your cat if it’s having any problems, until it adapts or until the whiskers grow back.