Follow @MyTypesOfCats
You are here: Home / Cats / How do cats get worms? 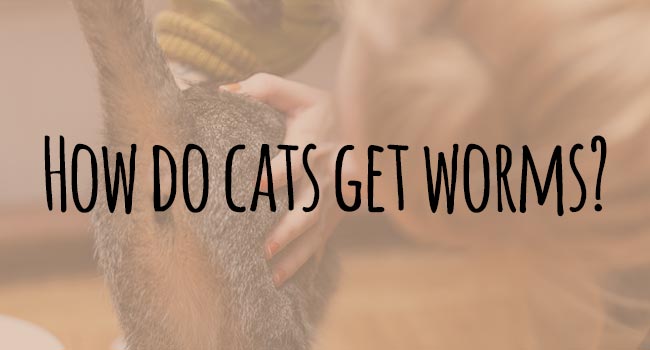 GARD Pro Not Registered
Cats can get a variety of intestinal parasites. The most common ones are “worms”. There are many ways a cat can get worms and it’s crucial to find out what the source of it is if your cat has them.

There are some types of worms that are actually a danger for the human system, so it’s in your best interest to help your cat get rid of them as soon as possible.

As I mentioned before there’s a variety of parasites that can harm your cat, but just how do cats get worms?

Symptoms of an intestinal infection
The symptoms will practically scream for your attention and worms are easily recognizable if you pay attention.

Vomiting and coughing are one of the most frequent symptoms, however the most definite sign if there are tiny worms visible, is in the cats stool.

Diarrhea, constipation, a bloody stool, weight loss or a general feeling of weakness are all pretty clear symptoms that there is an issue.

How do cats get infected?
Cats can pick up worms practically everywhere, so it’s surprising when cats get them, especially the ones who rarely or never leave the house.

Cats can pick up eggs from the grass or the soil they come in contact with or simply by ingesting them. The latter is the most common case, just like with humans.

There are certain worms that can frequently be found in pork, which is one of the reasons why the meat is always tested before it’s sold or prepared.

If the cat stumbles into a random piece of meat, it won’t hesitate to sink its teeth in it and it may potentially ingest certain types of worms.

Fleas also tend to carry worms, among many other illnesses. This is another common source of an ingestion infection.

Cats can pick up certain fleas from random areas, including the vet’s office or simply by coming in contact with another cat or animal that carries them.

The fleas may potentially spread from the cat to the nearby humans, and that is why you should treat your cat as soon as possible.

Most common types of worms
Roundworms are the most common internal parasite in cats. Adult worms are three to four inches long. Cats can easily become infected, for example kittens can get them while drinking the infected milk of the mother.

Hookworms, which are more common in dogs, are also present in cats. They’re smaller than the roundworms and reside primarily in the small intestine.

They primarily feed on the blood of the animal, which can cause life-threatening anemia, especially in younger cats. A cat can get infected through ingestion or skin contact.

Tapeworms are usually carried by fleas. The cat may also become infected should it eat an infected rodent.

The tapeworms are segmented and their length ranges from 4 to 28 inches. If the cat is infected, there are tiny segments of the worm visible on the fur on the cats’ hind end.

A different type of worm is the lungworm, which resides in the lungs of the animal. It causes coughing and respiratory problems. Cats usually get them by ingesting infected prey like rodents or perhaps from snails and slugs.

Outdoor cats are more prone to getting worms than indoor ones simply because they’re more exposed to soil and certain environments that might infect them.

Kittens and cats that do not receive appropriate care will most likely develop more serious complications with their ingestion.

Solution
The problem of worms is definitely one of the main reasons why you should take your cat to the vet.

The main problem is that you can’t assume which of the worms your cat has so you can hardly guess a treatment.

A vet will definitely first have to determine what the issue is or rather what type of worms your cat has and then provide appropriate treatment.