Follow @MyTypesOfCats
You are here: Home / Cats / How to tell if your cat is ignoring you 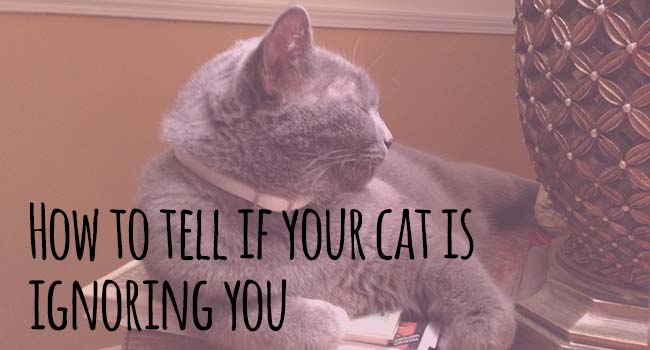 GARD Pro Not Registered
Did you ever wonder what your cat thought of you? For most cat owners, becoming a friendly image in their cat’s eyes is a priority, but sometimes this tends to be difficult. It would be a lot easier if we understood our companions better.

Cats only come when they feel like it
Have you ever had this happen to you? After a stressful day you remember the best thing that could cheer you up, and as you’re practically lifeless body is resting on the couch you call to your cat who is just a few feet away, and instead of coming to cheer you up, the fur ball just lays there and yawns.

One may say cats ignore us and act like teenagers… or crushes. Studies have shown that cats can distinguish a stranger’s voice from their master’s with ease, but as it turns out, they simply choose to ignore us when we call. Depending on their mood, if the cat wants to cuddle it will come to you, but it doesn’t owe anything to you so unless it feels like it, it won’t come.

“Dogs have masters, cats have staff”
We’ve all heard this famous phrase but is it entirely true? Depending on the cat it may vary but for most part it is true. Cat owners often assume cats know their place as pets, thinking they’ll be submissive however several signs show that cats:

A) Do not view themselves as a pets

C) Are their own “people”

Cats are lonesome animals but they do appreciate the company. Unlike most other pets, they don’t rely on you to provide them food but since you’re already offering… why not?

To make a valid comparison, a cat would survive on the outside should it suddenly became a stray which cannot be said for certain other animals.

One may say that cats view us just like any other cat, but they do care a bit more about us than any other cat. They most likely do find us to be clumsy and inferior in a way because we indeed are when compared to them. We don’t have a way of seeing in the dark nor do we sense when a cat is under our feet as we trip over them. A cat may even bring you a mouse to feed you because it came to the conclusion you cannot feed yourself. This frequently happens if you forget to feed your cat or you don’t give it enough food. One may guess it’s like saying: “I know you’re useless but I love you anyway”.

How do cats learn?
Training a cat? Good luck with that. Training a dog is a lot easier because, no offense to them, dogs trust us more if trained properly. Meanwhile cats are very stubborn creatures who prefer making choices for themselves.

A certain science experiment has shown that cats learn by mistakes, at least primarily, meaning it takes a while for them learn a trained action.

It may be difficult but it’s not impossible.

People mostly train cats by giving them treats and building specific patterns, but even then the cat will obey because it knows it will benefit from it.

In a way cats can be stupid because they take a while to learn things, on the other hand they’re smart because you can persuade a horse to jump off a cliff with you, meanwhile a cat would probably just hit the brakes and throw you throw you overboard.

They’re strange little creatures but they do love you in their own way. The greatest example of this is a stranger. One of my own cats is extremely cuddly, once picked up she cuddles constantly. Always around the feet, on the table, even shoulders.

However I was shocked when one of my neighbors said that same cuddly cat who has been eating food at her house for weeks, runs away from her every time she tries to pet her.

She isn’t exactly a stranger but it is rather odd, the way a cat bonds with its owner if provided the proper care so I definitely took that as a compliment.

In a nutshell, your cat doesn’t have to be super cuddly, but if it doesn’t run from you as it does from others, it’s sort of may like you.