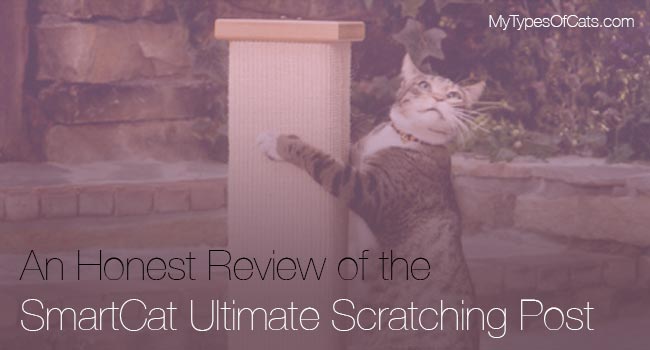 We all love cats.

We all love leather couches.

For the longest time though, it’s been near impossible to have them coexist in the same universe, simply because cats love to scratch, everything!

A quote that floats around says ‘As every cat owner knows, nobody owns a cat’.

They always seem to have a mind of their own.

Nevertheless, I think I might have stumbled across the pinnacle in feline mind control with the SmartCat Ultimate Scratching Post.

Admittedly, I’m not a MacGyver by any measure.

That’s why I was utterly relieved at the simplicity of assembling this contraption.

All I had to do was tighten a couple of screws at the base, and voila!

Surprisingly, the post looks really good. It easily blends in with the furniture and seems to have some pretty decent workmanship.

You’ll have to cough up a bit more for it, but every penny is worth it considering the aesthetics.

Now, I have a monster of a cat.

At 19 pounds, it easily knocks anything in its path. That was one of my hugest concerns while getting this post.

I wasn’t sure if it would withstand the affronts of my mini-godzilla. However, I’m pleased to report that the scratcher is still standing! The base is large and steady enough to handle hours of climbing, scratching and boxing.

This particular model is also pretty tall. At 32” high, it’s much larger than your ordinary cat toy.

Nevertheless, this works to the advantage of the kitties.

They can easily stretch through the whole length of their body, which is essential in toning their muscles. The height also makes for thrilling scaling adventures, keeping the playful ones entertained without end.

The durability of this SmartCat scratcher is worthy of note.

In the past, I’ve owned… No wait, my cat has owned carpet-based scratchers that wear out in no time. This one, however, still looks new many months after I got it. This has to do with the sisal fiber that it’s made of.

My kitty seems to have tons of fun digging-in its claws, but at the end of it, the fiber still looks pristine.

Just like the Furminator, it took a while before my kitty took to the scratcher.

After excitedly assembling it, I waited for a reaction, some emotion even, and nothing.

She just went on with her business of ripping up the couch and looking extra cute at that. I tried moving it near the couch, as the makers suggest, and nothing.

In frustration, nay, in desperation, I sprayed a bit of catnip on it. And the rest, as they say, is history.

Despite the initial hesitation, my cat now can’t get enough of this scratcher.

My couch has now been spared (Thank God!), and she is as happy as ever. For those who want to spoil their cats, a padded perch, that is sold separately, can be placed atop the post to provide a comfortable lounge for the kitty.

Damn right you should!

All things considered, the SmartCat Scratcher is worth every dime. This is probably the best cat scratching post I’ve ever used.

So if you’re looking for cat scratching posts, I highly recommend you pick this up.