Follow @MyTypesOfCats
You are here: Home / Cats / What Is Catnip? A seriously epic article on catnip 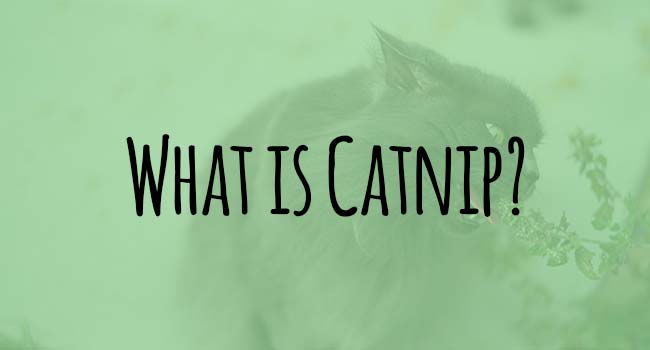 Usually when cats decides to take a nibble on some catnip, they start behaving strangely. They roll around and paw at invisible enemies, but why?

Humans consumed it for recreational purposes to cause some interesting effects. It has the word “cat”, in its name for a reason, mainly because cats are its biggest fans.

Napeta cataria, commonly known as catnip or catmint, is native to Europe and Asia, and is widely naturalized in many other places around the globe.

You can find it anywhere, even in dry places where most plants can’t tolerate the conditions. The genus name, Nepeta is a reference to Nepete, which is an ancient Etruscan city. There are about 250 species of this genus, catnip being one of them.

What is catnip made of?

Catnip belongs to the Mint family. The main ingredient of this plant is called nepatalactone, and it affects the nervous system of cats and humans, both in different ways.

Researchers have come to the conclusion that the main ingredient of catnip is similar to cat pheromones. This seems to be the main reason why cats love it so much.

Although it causes cats to mimic the way they behave when they’re in heat, it seems that they don’t display any sexual interest nor do they affect other cats by behaving this way.

As far as effects on the cats are concerned, cats usually react giddy, drowsy and energetic. In essence as if they have consumed some form of recreational drug.

Sometimes cats act aggressively when they come in contact with the herb and many owners appeared worried at first.

It most certainly is, so there is no reason to worry if your cat displays any unusual behavior.

When your cat starts acting this way it’s best to leave it be until the effects wear off. This usually takes about 20 minutes.

Some cats have a happy response while others tend to be more aggressive towards anything or anyone that approaches them, no matter what the case is, catnip doesn’t hurt cats so don’t take it personally. Just wait until the effects wear off.

The first reaction cats have to the herb is the most powerful one, just like when humans attempt drugs or alcohol for the first time.

Approximately one third of cats have shown no effects when coming in contact with the herb. The trait is an inherited one, and when tested it has been shown that male cats respond more strongly than females.

While some are highly entertained and start behaving goofy, which is quite a sight, others completely ignore it altogether.

The power of the reaction varies as well. There were some cases where the cat reacted only mildly to the herb. After becoming more familiar with the catnip, bigger cats appeared to be more entertained by scratch posts, balls, cages as well as other feline companions.

The last one being the most entertaining without a doubt.

There have been several experiments with big cats and their reaction to the catnip. A majority reacted to catnip, while there was a couple of cats that seemed more interested in other things than the catnip and some just liked to eat it and guard it from other cats. If you want to see some of these experiments be sure to look up the videos on YouTube.

Catnip effects on humans
People like catnip too, but there is no specific catnip for humans, so if you want to try it, you can share it with your cat.

Human reaction to catnip is different, however the effects vary weather the herb is smoked or taken as tea or juice.

In herbal medicine, catnip is mainly used to relax the body, especially when muscle tension or chest congestion is present. Many users have reported that the catnip tea puts them in a relaxed state, and has slightly hypnotic effects.

It can be used to relive the pains mentioned before, as a form of relaxation and also as a sleeping herb. To make catnip tea, add a teaspoon of dried catnip leaves or two to three teaspoons of fresh catnip leaves in a mug of boiling water.

Can you smoke catnip?
You can most definitely smoke catnip however its effects vary from person to person. Some people feel warmth throughout the body, and they have a feeling of euphoria.

Meanwhile others experience coolness instead of warmth. Most say that catnip relaxes them after a stressful day and helps them find calm.

Some experience slower reaction times, so after consuming catnip in any way, performing actions that require quick reaction times, such as driving, are not recommended. The effects of catnip usually pass after 2 hours when smoked, for a dose of 1.5 grams.

Can you get high on catnip?
If catnip can make your cat purr then can it make you purr too? Many people display signs of getting high when they consume catnip, however the effects aren’t really close to the ones present when smoking pot, for example.

It causes general feeling of relaxation just like pot but it doesn’t really cross the line where people behave completely high.

People who smoke catnip without knowing what it was, displayed signs of relaxation but never really crossed the line.

Catnip is also used in health as a mild sedative, usually for people with ADD and ADHD. Suffice to say, if you are a cat, you’re most likely going to get high on catnip, but if you’re reading this sentence you’re probably not that lucky.

Side effects of smoking catnip
Smoking catnip isn’t harmful for the human health, however it has been known to cause some uncomfortable side effects, especially for people who are using it for the first time.

Side effects include nausea, headache, dizziness and feelings of impacted coordination as well as problems with balance. The impact of the side effects varies depending on the amount consumed.

These side effects are quite uncomfortable but hardly life threatening. They’ll fade if you lay down for a short while, just like with alcohol or a substance that has any similar side effects.

If you’re interested in trying catnip, be sure to take small steps at first to avoid causing further discomfort.

How much is too much?
For human consumption a reasonable amount is in order, about a tablespoon or two per cup, just like any other tea.

If you start to feel negative side effects (although most occur only if the catnip is smoked) you might want to stop. As far as feline consumption is concerned, there isn’t a specific amount that is too much for cats.

They take as much as they want and if they do eat too much of it, they will simply throw it up, just like when eating large amounts of any other herb.

Cats can only hurt themselves physically if they eat so much catnip that it causes them to be hyperactive without much restraint. Although catnip is generally harmless to cats, it isn’t recommended for pregnant cats to consume it.

How to grow catnip
Catnip is one tough plant. Unlike many others, it’ll grow even in harsh conditions. It works quite well if it’s seeds are planted in drained soil.

If it’s exposed to the sun, it will need daily watering as the herb itself dries out quickly in hot weather, especially in the summer.

You might want to keep your cat away from the plant as cats react to it as soon as it pokes out of the earth. They’re most likely going to rub against it or lie down, crushing the plant and preventing it from reaching full bloom.

Catnip spreads quite effectively. If planted in a garden, it is not unheard of for several numbers of catnip plants to start growing in various and potentially undesirable places.

If you find your cat rubbing against a random part of your garden, you might be having this problem. The plant is quite resilient and will grow in harsh environments, which is why many people view it as a problem.

People usually plant in pots to prevent this from happening, at least before they choose to grow larger amounts of the plant. Catnip can be dried like other plants, and it is suggested in wintertime when the plant is under snow.

You might want to save a generous amount for that time of the year. People usually dry the leaves of various herbs to make a better tea. Catnip is no exception.

Does catnip affect dogs?
Catnip affects dogs just as much as it does humans. In cats, it provokes excitement as well as relaxation, however for dogs the reaction is quite opposite. Other than being used for medical purposes, it has no other significant uses when it comes to dogs.

Although catnip doesn’t affect dogs, it doesn’t really prevent them from sniffing it in great detail. As their paws or other body parts come in contact with the herb, they carry the scent of it around with them.

This could provoke reactions from cats that detect the scent. A dog might misunderstand this behavior as aggressive and react in a similar way, so you could say it doesn’t affect dogs in a chemical way but perhaps in a physical one.

Catnip is often used as a mild sedative for dogs that are nervous of going to the vet. Half or less of a tablespoon of dried catnip can be put in the dog’s food or a few fresh catnip leaves in the dog’s water to provoke a sedative effect.

Catnip oil promotes urination, forcing the body to relieve itself of extra water and toxins. A small amount of catnip can be used both for dogs and humans to maintain a healthy system, however be careful not to give too much.

The oil has proven quite effective when it comes to healing smaller wounds, like scratches. Fresh catnip or catnip oil can be applied to the surface wounds. Although I’d rather use Aloe Vera gel to heal my wounds.

What is catnip used for?
Aside from being used as a recreational herb both by humans and cats, catnip has proven quite useful when it comes to repelling insects.

A research has shown that the essential oil in catnip is about ten times more effective at repelling mosquitoes than DEET (a compound used in most insect repellants).

Catnip can also be used to make a spray. You can mix up a few catnip leaves and heat some water to the boiling point, then boil the water over the catnip and let it sit for 10 minutes. Take the catnip out and refrigerate the mixture. When it cools down it can be used just like any other bug spray.

A behavior tool
Catnip usually provokes a powerful response in cats and as such, can be used as a training tool. It can build the confidence of cats and cause them to behave more freely, so in a manner of speaking it can be used as a psychological tool.

It can also be used to alleviate fear that cats have from car rides for example. Your cats might stop worrying about the short ride to the vet, making the entire process much easier both for you and the cat.

Where to buy catnip
Another alternative is buying catnip from a local pet store, if you have one near you or buying it online. You can buy premium catnip from sites such as Amazon or you can look up various online pet stores.

They usually have a large selection of catnip. There are also toys for cats that contain catnip, which will surely entertain both you and your cat for quite a while.