Follow @MyTypesOfCats
You are here: Home / Cats / Why Cats Are Better Than Dogs 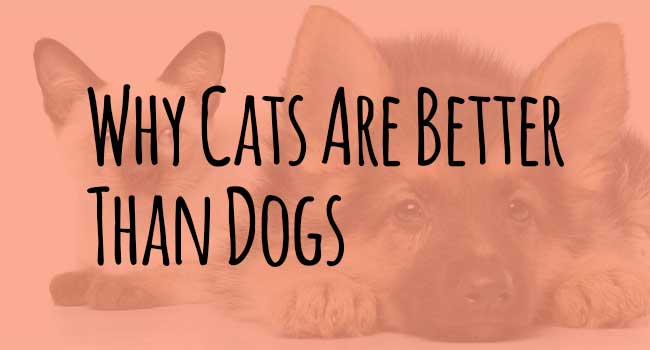 GARD Pro Not Registered
This phrase, why cats are better than dogs, is like a perennial Mexican standoff between the canine and feline clans, and their masters that sends out an endless debate on who should rule the world of domestication.

Who is the better pet – dogs or cats?

Which pet gives the best credit to the phrase, “man’s best friend?”

For dog lovers, their pet is the only animal that best describes this phrase because dogs are not just friends, they’re family too.

For the cat lovers out there, here’s your chance to prove your furry friend’s worth. I’ve listed down a few things below that’ll prove why cats are better than dogs.

I bet you have a list of your own but I’ve narrowed it down to a few main pointers that should sum up every reason why your cat is the best type of pet out there.

Reasons why cats are better than dogs

Cats are more polite than dogs. They don’t jump right at you to welcome you like any yelping dog. They don’t plant a wet kiss on your feet or cheeks when you arrive. They don’t playfully bite your toes or yelp at you.

Cats are more regal in their stance, they would usually stay where they are and just observe you from afar and then they wait for you to come to them.  Very cautious, discreet and sometimes stately, cats prefer to be quiet and stay out of your way.

Cats are also cleaner and they smell way better than dogs.

Don’t you ever wonder why your dog smells earthy even after a bath?

No matter how many times you shampoo him or give him the daily combing and powdering rituals, or send him to the vet for his regular grooming, these routines can never fully disguise your dog’s scent that will unmistakably leave your nose doggone.

Cats, on the other hand, emit no smell at all.  It’s pretty amazing that their self-grooming can both be used as a constant bath and as a regulator of their body temperature.

This way, they won’t secrete body so that nobody would even know that you have a cat at home.

Why do we get a pet in the first place?

It’s because we need the company and the entertainment.

It is in this instance that cats are better than dogs. Cats are total entertainers and are funnier than dogs and sometimes our feline friends don’t event know it!

Have you ever tried beaming a laser pointer onto a wall and then out of nowhere, your cat chases it tirelessly?

The dancing pointer leaves them baffled and it’s awfully rewarding to see them so playful as they endlessly chase the pointer no matter how high or far away you point it – I swear it’s the best entertainment anyone can have at anytime of the day.

Unlike dogs, cats are born entertainers. They can just sit in a corner and stare at you with their usual cat charm. At times, they would just look at you as if you took their ball of yarn and they would seem to say – it meant the world to them – and just like that, they would look so cute and funny.

Cats take care of their toys better than dogs.  Have you ever seen a dog’s toy? I know, they’re either swallowed, buried in the garden or shredded to pieces, right?

It’s different with cats – they seem motherly when it comes to their toys.

They carry it with them or hide them in their bed and take care of them as if it is their own kitten.  Most cats are even like scavengers, they would stockpile on every bit of toy or thing you give them and then treasure it forever.

Cats also do not need to be walked.

Have you ever seen a cat on a leash?

Much less, being walked outside – on a leash?

Never – not in a million years!

Cats are unlike dogs, which need to be walked whether or not it’s raining. They’re more comfortable sitting smugly by the sink or the porch or on top of your couch while watching the fretting dog as he fusses about while waiting for his master to walk him.

She would rather stay put and continue with her self-grooming with not a care in the world. A leash around her neck is just not her thing.

Unlike loud and sometimes annoying barks from dogs, a cat’s purr is usually gentle. Cats purr and it doesn’t matter if they’re hungry or happy. The rhythmic purr coming from a cat is their way of communicating what and how they feel.

These are just the few reasons why cats are better than dogs. Which pet will you choose?