Follow @MyTypesOfCats
You are here: Home / Cats / Why Do Cats Have Tails? 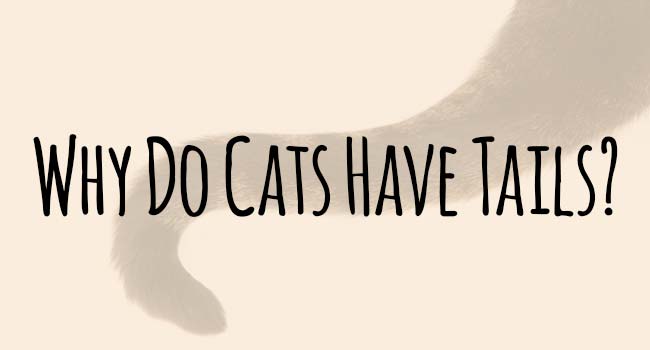 GARD Pro Not Registered
The tail is an interesting body part with most creatures that have them and it serves a different purpose animals.

The main one being balance while other animals like horses and cows also use it to ward away insects and other pests. Some dogs and cat species barely have a tail or have a very short one, but today’s question is mostly fixed on cats.

Main purpose of any tail
It is balance, as mentioned before. It’s not the form of general balance that impacts walking but the balance that allows cats to stand on narrow surfaces for example and when hunting and when speed is required.

You’ll hardly see a cat fall off a fence it’s standing on due to a loss of balance. The only thing that might cause such a fall is a misplaced step resulting in loss of surface beneath their feet, this also being a rare situation as cats are extremely agile.

As far as maintaining the balance of their bodies, the tail isn’t the only thing that is used. The cats’ whiskers are just as important as the tail, especially when navigating narrow areas.

They pick up the air currents in dark spaces as well, while the tail assists in navigating through those unknown spaces. Suffice to say, the tail is a part of the system that cats use to move around with and is part of the primary system they use for hunting.

Feelings of display
There are other uses for a tail aside from balance, for example emotions.

Cats show their feelings by growling, purring and their general body language, however the tail is the one that you really need to pay attention to in order to see how a cat is feeling without it displaying any sounds or behavior.

For example a tail lifted straight up usually means the cat is happy and greeting. It can be most frequently observed when you get home and your cat approaches you.

Also when you enter the kitchen and the cat is looking forward to food. Other tail positions can tell you if a cat is upset, angry, scared, stressed or any other emotion. The speed of movement is also important.

What happens when a cat loses its tail?
The loss of a tail can be extremely painful (just imagine someone chopping of your thumb) but cats can adapt to its loss.

While the loss of whiskers required a longer time to adapt and it being more difficult, the main issue with the tail is the pain.

It won’t grow back but the cat will move on with its life and adapt. Its emotions won’t be displayed and would be a bit more difficult to see.

What to do if a tail is injured?
Tail injuries usually happen in catfights, when people tug on the tail too strongly, usually children, if a tail is caught in a shut door, a car accident or a similar accident.

Damages near the tip of the tail aren’t that serious and the cat should recover; however the damages closer to the head of the tail (it’s beginning) can be more serious.

If you think that your cats’ tail has been injured, please please please take her to the vet. Even though your cat may not be showing any pain, you can be sure that she is in serious pain.