Follow @MyTypesOfCats
You are here: Home / Cats / Why Do Cats Sneeze? 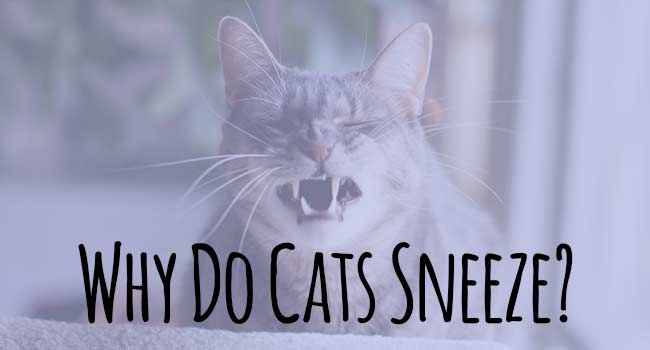 GARD Pro Not Registered
Cat sneezing is hardly any different from human sneezing. It’s simply a reflex the body uses to expel foreign bodies that are blocking the air way or if they’re simply irritating the body.

Surely you’ve had a moment where you sneezed several times just within a few seconds and had nothing wrong with you. The same problem occurs with cats. Why do cats sneeze? Well they sneeze due to an array of reasons that can lead to confusion so this question has several answers.

A few answers to why do cats sneeze

External stimuli
This is a really fancy word meaning something physically stuck in the nose, forcing the cat to sneeze once or several times until it’s expelled. The stimuli can be pollen or dust for example.

If this is the issue, the cat will sneeze as many times as needed until that ‘something’ is expelled. After that it’ll go on its merry way so it’s safe to say that an occasional sneeze is something you can freely ignore.

The time for worry comes when the cat keeps sneezing for a longer period of time. Just like in humans, prolonged sneezing or coughing or any symptom of sickness means something more serious is happening.

A serious cause of sneezing
The main cause is usually some form of an infection. Viral, bacterial or fungal infection can provoke repetitive sneezing, just like a common cold provokes it in humans, however it’s a more serious issue than a regular cold.

While humans simply take a few days of rest for the illness to pass, cats have a fairly harder time dealing with their infections and you may think your cat has a cold but in reality it can be something far more serious.

There are many other illnesses that can cause prolonged and strong sneezing such as Chlamydia, mycoplasma, FIV and many others that manifest themselves along with other symptoms.

Separate the two
It can be fairly difficult to know when your cat is sneezing due to a sickness and due to an external reason. You can’t possibly carry your cat to the vet every time it sneezes, no matter how helpful that would be.

Look for a pattern in your cat’s sneezing. Like humans, they’re allergic to certain things or at least physically irritated by them.

Cigarette smoke, sprays, cleaning agents, candles, dust, pollen and even some brands of cat litter can bring on sneezing every time your cat comes near them.

This doesn’t mean you shouldn’t use cat litter but the general rule is that every cat is different and you need to figure out what affects your cat the most.

Symptoms of an infection
You can connect the dots to a certain issue if there are more symptoms manifesting together. For example, sneezing and bad breath with older cats means there’s tooth trouble.

Meanwhile the most common issue that can put your cat at risk in a short period are infections. An upper respiratory infection always causes sneezing followed by other general symptoms that are practically screaming that something is wrong.

Discharge from the eyes or nose, watery, bloody, yellow or green is highly irregular. Other problems include coughing or excessive swallowing, general loss of energy, visible third eyelid, dehydration, fever.

The biggest issue with cat diseases is that unlike humans, their condition frequently changes in short periods of time. When we get sick, we usually wait for a few days for more serious issues to manifest themselves, kind of like when you wait for a tooth to start hurting before you go to the dentist.

Cats don’t have that luxury.

Firstly, they don’t express pain that openly and secondly, more serious diseases take effect in just a few hours as oppose to the few days we’re all used to waiting before a problem occurs.

To protect your cat from any infections, be sure it’s vaccinated, and meanwhile if you don’t vaccinate your cat for one reason or the other, be sure to react quickly if signs of trouble occur, and I don’t mean quickly as in the day after, but instantly should serious symptoms occur, even if it’s 3 AM you need to call a local vet and ask for advice or even visit them if needed.

I do believe most cat owners couldn’t care less about what others think of them when their pet is in trouble.