Follow @MyTypesOfCats
You are here: Home / Cats / Why Do Cats Wag Their Tails? 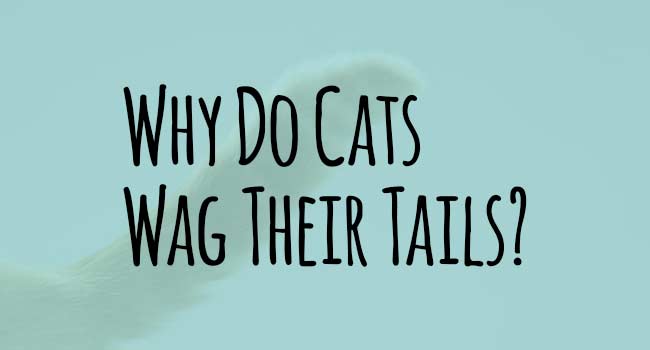 GARD Pro Not Registered
Cats speak directly to humans by using their voice and body language, but more indirectly and more importantly they use their tails to display their emotions to the detail.

Observing cats can show you exactly how they feel. Whether or not wagging their tails is something they do on purpose, it certainly is a useful way of communication to their owners. Why do cats meow? To tell you when they want something. Why do cats wag their tails? Well, usually when they’re upset, but the general movement of the tail can be used to show you how they feel! So pay attention, it can be quite useful.

The purpose of the tail
Cats move their tails frequently because they’re balancing their body. Usually before they’re about to leap at a target. Surely you’ve noticed your cat moving its entire back side of the body, including the tail, just as it’s about to jump at something they find extremely interesting.

Slow movements of the tail from side to side can mean contentment. If you find your cat sitting quietly, it might be moving its tail slowly as a sign that it’s focused on something, perhaps a bird or a random target moving nearby.

It might be difficult to see the difference but when a cat is slowly moving its tail, it only uses the tip of it. Meanwhile when it’s annoyed the entire tail moves from side to side.

There are many other emotions that can be displayed through the cat’s tail. They accompany movements of the ears, whiskers, appearance of the fur and the general body language.

For example a focused cat wags its tail and points its ears in the direction of its target. Meanwhile an afraid cat will have its tail looking like an exploded brush, basically spiked and pushed towards the ground, as well as fluffing its ears.

An exploded brush tail is also present when the cat is aggressive, angry or in the state of defense. The cat could be provoked by fear but in the effort of defending itself, it lifts its spiked tail as high as possible as well as the rest of the body.

Cats spike their tails when they’re surprised. Believe it or not you can in fact scare your cat, so if you see its tail spike, it means that for a split second, you were perceived as a threat. It will dismiss the threat but you still may want to convince your cat you’re anything but.

It’s not the tail!
When cat’s spray, a certain spot on the backside of their body is the one moving, and their tail only follows as a part of the body. It’s not displaying any kind of an emotion but more of a physical response.

Meanwhile, that same quivering of the tail is present when a cat is happy to see something, usually a human companion. And I say companion because it’s well known that dogs have masters and cats have staff.

A quivering tail usually accompanies quick running towards the target, so if you see a cat running at you with its tail in this state, it’s nothing to worry about.

A lifted tail is an extremely good sign even if it doesn’t quiver. It means the cat is very approachable and is in a good mood for playing. A hooked tail is also a good sign, even though it’s a weaker version of the entirely lifted tail.

It means the cat is friendly but still unsure. Usually in the mood for playing but still exploring the field and alert. A neutral position is a tail lifted directly as an extension of the body, indicating the cat is careful. Not aggressive, nor playful but moving with caution.

Mixed signals
One specific movement of the tail can be quite confusing. Thrashing of a fully lifted tail could mean the cat is aggressive however a thrashing of a certain degree can mean curiosity or that something looks interesting.

It can also be an invitation for other cats to play. The tail movements apply to the cat’s body even when it’s resting. The tail is usually curled around the body, meaning contentment or sometimes nervousness the cat has.

You don’t have to study the differences under the microscope, instead just observe the combination of the tail movements with the body movements and the specific situation at hand. Still, studying the body signals of your cat is a good idea before jumping to conclusions. It might save you a scratch or two.