Follow @MyTypesOfCats
You are here: Home / Cats / Why is my cat coughing so much? 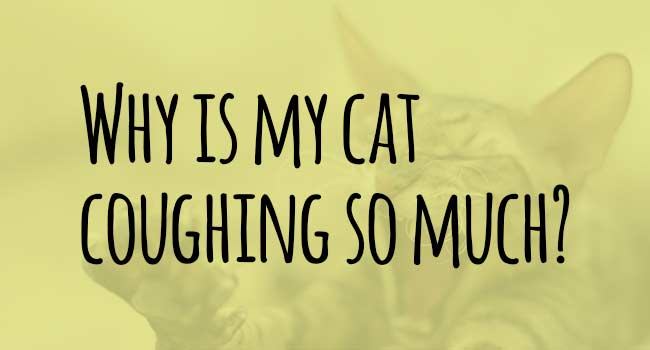 GARD Pro Not Registered
It can be somewhat annoying to you but unfortunately cats’ coughing isn’t a regular thing, so you should definitely pay attention to it if you find your cat coughing.

Coughing is a reflex present with cats the same way it is with humans. When there’s a tingling in the back of the throat, the cat tries to get rid of it by coughing repetitively. However a cough can be something negligible or a sign of a more serious condition.

Furball attack
Cats take their little baths several times a day so a hairball forming in their throat is something to be expected. Fortunately you don’t have to wonder long because you’ll see your cat cough out a small, wet ball of fur.

Somewhat disgusting but nothing out of the ordinary.

Note that not all cats have this issue. Although they had some issues with fur, I don’t think I ever saw any of my cats cough up a full-grown furball.

When their bodies crave something, cats proceed to acquire it and they’re a lot more direct than humans. For example, sometimes a meal doesn’t sit quite well and the cat proceeds to nibble on some grass, or it simply craves grass for one reason or another so it’s not unusual to see cats eating grass and leaves outside.

Sometimes they might accidentally swallow unusual objects inside the house, usually food wrapping so be careful about that. Cats are extremely picky and eat carefully but you shouldn’t fully count on it.

A symptom of a problem
Wait for a short while before you assume something more serious that could be the cause of the coughing. If it’s something negligible it will disappear in a few hours if not immediately.

If it doesn’t stop, cat coughing can be a symptom of a heart disease, a respiratory infection, heart failure or an asthma attack caused by allergies, the last one being the most frequent cause.

As far as natures allergens go, you can hardly keep your cat away but be sure to keep allergens like smoke, dust and air fresheners. If the coughing doesn’t stop immediately or at least within a few hours take your cat to the vet immediately, especially if accompanies by other symptoms such as sneezing, a runny nose and watery eyes for example.

Some problems that cause coughing can show fairly quickly so don’t delay a visit to the vet. If it’s a respiratory infection it may cause breathing difficulties for you cat within only a few hours and if not given the proper treatment in time, it might suffocate.

Cat flu can also be the cause, and usually proper treatment involves enough liquids and some medication prescribed by the vet.

Heartworm can also be one of the more serious problems and requires a more serious treatment, usually involving strong medication. With these issues the longer you wait the worse the problem gets, so if your suspicion last more than an hour or two, visit the vet.

Treatment
If it’s a simple cough, just provide water for your cat but then again that should always be available. If it’s a serious issue, be sure you know what your cat has by looking up the symptoms that occur with the coughing.

As far as home remedies go, you could try the amino acid L-lysine 250 mg daily as a treatment against a virus known to frequently be the cause of coughing. It’s fairly safe but it doesn’t really do much.

The antibiotics that do work however, are prescribed by a vet, and although you can spend a fair amount of money looking for your own medicine blends, you might want to save the money for something that you know works. Home remedies work with some issues but the best thing you can do for your coughing cat is give them a bowl of fresh water and then take a visit to the vet.

Symptoms with coughing
While a lack of energy isn’t that obvious of a sign, vomiting, sudden collapse or coughing up blood are pretty obvious symptoms.

Cats can cough up blood either because of an illness that causes some internal bleeding or a physical tear in the throat due to excessive coughing.

Coughing or sneezing can happen in spasms and unlike humans; cats don’t try to hold their reflexes back. Excessive swallowing or dehydration is also a frequent companion of coughing; you’ll most likely notice the smell first though.

The area around the mouth will be wet if not dripping. Loss of appetite, fever, or discharge from eyes and nose may also appear. The problem with coughing is that it accompanies most other symptoms of both serious and harmless situations with a cats health. If it’s accompanied by any of the symptoms above or any symptoms you find remotely suspicious, play it safe and visit a vet.